Nice to See You…

January always feels like a rather difficult month to instigate and artistic action. The excesses of Christmas last longer than they should; the cold winter air quells any motivation and then there’s the small matter of completing a tax return…

Luckily then, I have been able to take part in a group exhibition without hardly having to lift a finger, all thanks to no less an institution that the University of Chester – the university I graduated at in 2007. 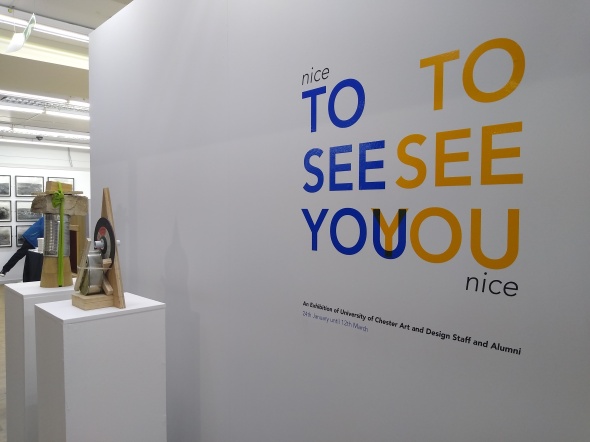 Nice to See You to See You Nice is a group exhibition featuring work from staff, students and alumni from the University of Chester, and is housed at CASC – a fantastic contemporary space in the heart of Chester set up by the University.

My work – Seven Keys – is nestled between over 70 other artists, makers and designers each connected to Chester University. It’s great how the exhibition acts as such a social platform; the opening evening on Friday 24th January was a hive of conversations between Chester University affiliates, each brought together through artistic practice. Perhaps the exhibition will reaffirm some friendships, encourage collaborations or instigate further creative endeavour.

Seven Keys is a series of perfumes about love and lust. Presented are 7 perfumes; only one is a concoction of natural ingredients which represent the virtues of love. The rest comprise of synthetic oils and represent lust.

Seven Keys is a great introduction to the possibilities of perfumery – highlighting that with careful scent design perfume can house narrative and symbolism. The theme also lends itself to valentine’s Day, which is useful as Nice to See You to See You Nice runs until 12th March. The opening hours are Mondays – Tuesdays 10-4; Fridays 12 – 6; Saturdays 10 – 4.

The End of the Beginning is Marked With Success

Last Friday saw me manage and curate ‘Sweet Tooth’ – a group exhibition around the theme of food at Funky Aardvark Gallery, Chester. It was the first time I had been fully responsible for organising and curating an exhibition since my solo show at Gage Gallery, Sheffield in March.

The difference here was the refreshingly positive impact my show had on the other artists involved. Learning from the struggles of producing a body of work and promoting it alone, I decided that this particular venture would be appropriate for collaboration – with each artist approaching the subject of food differently and as such exemplifying the scope the subject of food provides to an artist.

We have my own work; a physical narration of a three course meal which seeks to exploit the physical properties of food, rather than the pleasurable effects food has upon the individual. We also have artists concerned with re-imagining the fairy tale; those using food to contain information that reveals itself to you through knowledge of your environment; those harnessing food’s capacity for metaphor and personal reflection,; and those who speculate what food could become. Whilst there is a diversity in the work shown, there is also a cohesiveness that underpins the experience, allowing for an inherently satisfying and engaging exhibition. 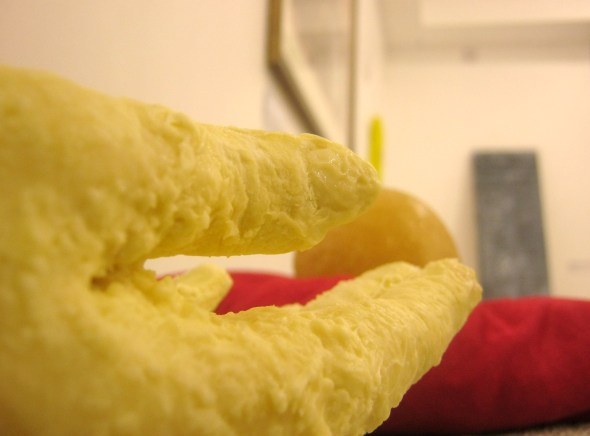 Each artist has contributed something which seeks to highlight, exploit of disrupts our relationship with food. From a collaborative point of view, and keeping in mind that not many of the artists knew too much about each other beforehand, the show works very well: It successfully provides an audience with an experience that broadens their perceptions of food and what food can be – with work that provides an inclusive sense of solace and work that seeks to challenge pre-conceived notions. 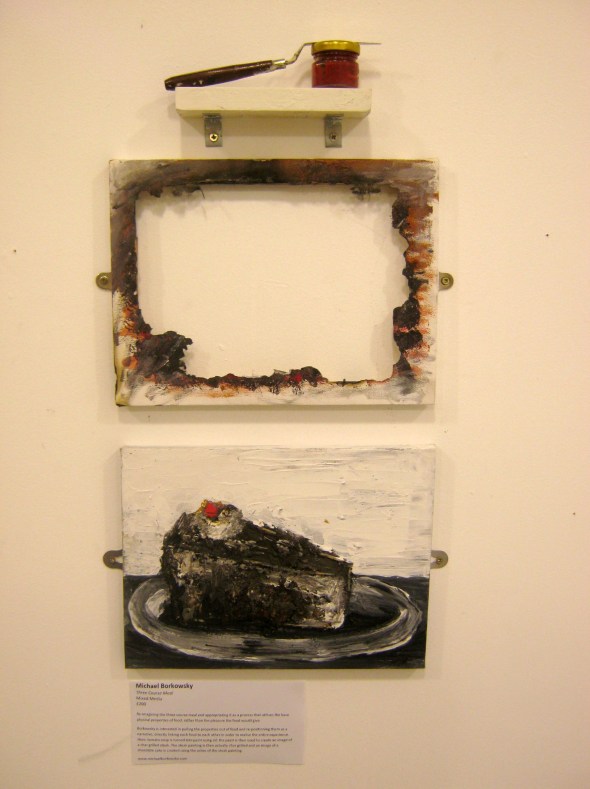 My own work sought to re-imagine the three course meal.

It is certainly one of the most enjoyable endeavours I had been part of, and fittingly acts as a neat way to call time on my entirely food-based work. It was enjoyable due to the diversity of the artists involved, and the social experience of meeting artists with similar artistic concerns. Although my practice is now moving away from food to look in particular at memory, I do hope to work with these artists again, as it was great!

So anyway, I press on – feeling as though I am emerging from this year ever more established and ready to further my own creative practice. I am sure this experience will inform my future endeavours and provide a marker for which to gauge future successes.

You can see ‘Sweet Tooth’ up until 17th September at Funky Aardvark, Chester.

With special thanks to the artists involved:

The City of Chester is known for a lot of things:  Romans, shopping, being old and – surely most significantly of all – being where Hollyoaks is set. However, what it is not known for is a diverse and thriving contemporary art scene, and that’s because it doesn’t exist.  Chester theatres have to survive on budgets of about 45 pence; the cinema is an increasingly dilapidated empty shell; and as for contemporary visual art, well, aside from having no contemporary spaces the sheer air of snobbery that exists within Chester’s walls is so pungent it can be smelt from outer space. Any exhibition containing contemporary visual art is met with rabid cries of ‘we can’t let this kind of thing continue’ from locals: These are kind of people that would get outraged if the beige hue on manila envelopes was decreased by a fraction of a percent. As you can imagine, these are anything but my type of people and they are certainly not an audience I wish to engage with.

There are some positive points to Chester that just about keep the tumbleweed from blowing. The music scene probably just about boarders on average and venues such as Alexander’s and Telford’s Warehouse to their level best to develop emerging performers. However, this interests me about as much as drinking a cup of hot piss. I’m a visual artist. And if I am to develop, I need to escape.

Towns and small cities can utilise the arts effectively. A quick pop down the road from Chester to Wrexham will show you that the arts can make positive and vibrant contributions to smaller communities. However, they do not possess the allure of larger cities, which effortlessly seem to captivate with Hollywood-style notions of prosperity. I have wished to live in a large city for some time. Indeed, a majority of last year was spent gawping at cities on Google Earth until I fell into a semi-conscious state. But for reasons that are both professional and personal, I opted for Sheffield.

Sorted then! Well, except for the tiny issues of packing, finding a job and finding a house in a city sixty miles away from Chester. Although it must be said that, whist on a break from the mind-numbing procedure of packing, an idea occurred to me:  As I made myself a sandwich I began to consider the ingredients I was using. Cheese from Cheshire, mustard from Norwich and bread from …Well bread from Tesco actually, but nevertheless, it struck me that food is loaded with historical connotations which are grounded in local communities.

So can a city, a town, an entire county be defined by local food? Can areas be mapped according to the food it produces? More interestingly, can we manipulate and alter this local definition for artistic gain? For example Henderson’s Relish – a product local to Sheffield – and Colman’s Mustard could be exploited in order to represent each other: Blurring local and national boundaries and consolidating local histories. It is certainly a notion which can be explored. But for now, you will have to contain yourselves with this little number, which is Henderson’s Relish represented through the medium of Colman’s Mustard. Enjoy! 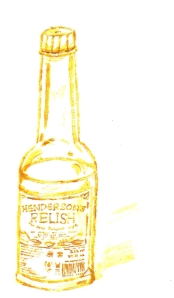