Biscuits With a Hint of Emotion

The next piece of work I wish to put on virtual display for you all to gaze upon is this thing: 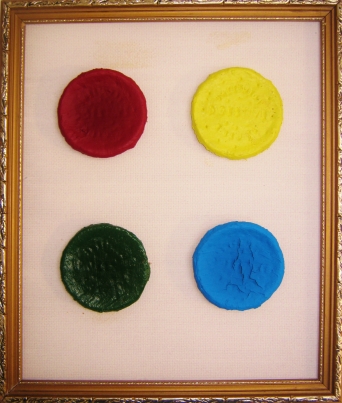 Four digestive biscuits, coated with four different colours of acrylic paint and present framed and mounded on a canvas board. Here, attempts have been made to allow the audience to respond to this piece directly and with with immediacy. Block colours are able to highlight in a base, almost binary way, emotion. This corresponds with the accessible nature of the digestive biscuit. The basic nature of the piece calls into question the how we respond to our most instinctive emotions, and any action carried out in relation to them.

When rooted within a culture that exploits the nature of consumption, emotions too become a consumable item. Dismissed or glibly accepted, before being forgotten in the wake of another, equally disposable end. This piece seeks to highlight and describe this notion, and suggests that emotion can become a consumable product. Anyway, enough babbling. What do you think?

For the past two weeks I have attempted to begin and complete one painting a day, ad so far, I am ecstatic to report that such attempts have been successful.

The initial reason for undertaking such a feat was simply attain a sense of solidarity and rhythm to my practice. But then it hit me that the very process of completing one painting a day comes with its own set of challenges which perhaps can be attached to a concept. It emerged that parallels existed between this energetic, hurried yet somehow hollow approach to making work and the processes involved in preparing and eating lunch: And so lunch, and the concepts that exist within lunch, have ultimately been attached to this particular strand of my practice.

Lunch is seemingly a diminished meal, it can consist of anything, and it has no definition, no identity and no authority. It can exist virtually any time in the afternoon and often exists whilst at a place of work. It is devoured over a desk, in the formal and contrived environment of a staff room, or purchased from an outlet and guzzled down on the move. Lunch has no lasting joy, but is penetrating within its own time frame.

This rushed experience of lunch is reflected and exploited in my work, whereby I have depicted the lunch I have eaten that day within the time it took to eat it: Therefore, captured in my ‘one painting a day’ is a superficial sense of vibrancy, without definition or authority. Brush-strokes contain energy without quality. Form is not fully realised and addresses the social disregard for lunch, relative to other meal times. 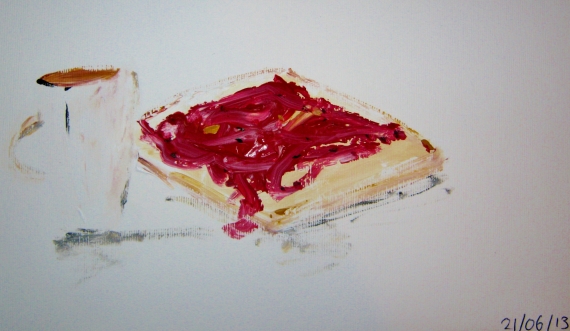 I have placed these works on my Timeline on my Facebook Page. This serves to further reflect the temporary and disposable nature of lunch: Timeline posts appear in news feeds instantly; they explode onto the screen and are readily accessible. However, the passing of time sees my post disappear from immediate regard – incessantly shifted into obscurity and replaced by new posts, from other individuals, all of which are interchangeable and often concern disposable social themes.

So, think of my ‘one painting a day’ images the next time you attempt to gobble down your lunch whilst trying to brave the elements. And enjoy the penetrating yet fleeting burst of joy lunch time has to offer.

A Departure to the Countryside 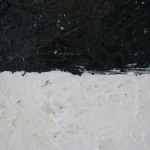 Leaving food alone for a bit to think about trees instead.

Landscape. It’s a subject that – like still-life – can be given a bit of a kick up the arse in order to allow it to become relevant in the 21st Century. If we take into account my incessant desire to progress and embrace new artistic direction, it seems appropriate that a departure from food can emerge in the shape of re-considering landscape.

So winter is (Finally) beginning to recede, buds are tentatively emerging from trees and, more noticeably, embalms associated with the spring are beginning to appear: Woodland creatures can now be found on crockery, floral designs began to emerge on garments and as I was walking down the street, I noticed a woman wearing a small acrylic pin badge cut into the shape of a fox. Bearing this in mind, a poem began to form mentally, which regarded the acrylic fox-shaped badge as an object which, despite being lifeless, still retained connotations associated with a fox: 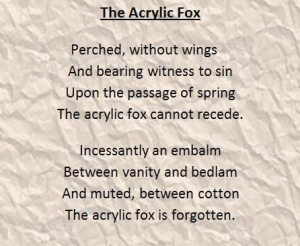 Now, bear with me – there is a point to all this. You see, my initial hunch was that this poem must be related, or relatable, to the notion of re-considering landscape. And upon pondering the relationship between the two some more it hit me – The fox in my poem is of interest because it is removed from nature: It becomes a component; an emblem that, through the medium of plastic acrylic, is able to transcend its surroundings and become a symbol, a fashion statement, an entity that becomes open to subjectivity and abstract thought. The fox is no longer an animal that is merely attempting to survive: It is instead a statue.

Can we apply this to landscape? When the components of landscape are removed from their surroundings, and applied to something else, what are we left with?

I propose that by manipulating these components just enough so that they are to become perfectly usable as paints, whilst still enabling them to retain their intrinsic natural elements, then what you will be left with would be a medium with infinite possibilities which can be applied to a surface and at once represent visually whatever subject an artist wishes, whilst also retaining the subject of landscape: Landscape will still exist – incognito, still and subtle – but embedded within whatever subject the paint is said to render. 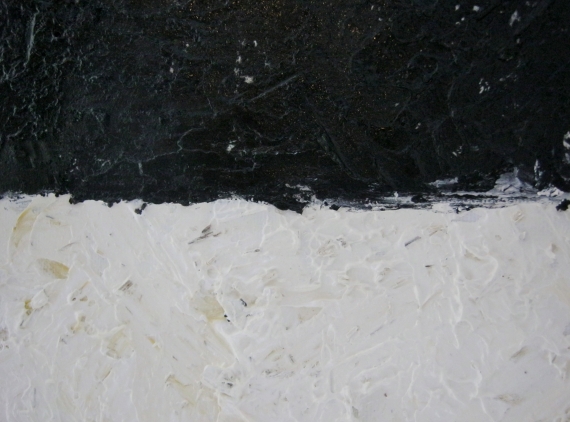 ‘Paint Made From Soil and Bark’ (Oil on canvas board)

So basically, I’m doing what I did with food, only with landscape, except here I am regarding the components of landscape in a richer way. This, in turn, has allowed me to ask critical questions of my food-based practice. Why am I choosing the food I am choosing? Are the components of a meal more important than the end product? Does an audience consider the same food relevant as me? These questions would not have emerged if I did not take a slight departure from food to consider landscape: Therefore, my professional development may have stagnated. This confirms my belief that it is important to embrace whatever challenges come your way: If you don’t, you may end up creating things of no value to an audience.

An exercise in non-edible culinary practice.

This – you’ll no doubt be pleased to know – is just a short little post that considers the entities of food and light in such a broad sense that it’s in danger of being credited as a newly discovered ocean. Anyway, here goes…

Recently, the very concept of light entered my brain in relation to artistic practise. It is a concept taken for granted as light is fundamental to even instigate practice in the first place. As with all newly considered notions, I took to exploring ways light related to food and, in turn, how it can be applied to my own work. It struck me that the relationship between the two is more intertwined than you might think.

Food and light draw parallels to each other as both are at once a necessity and can be used creatively. A humble strike of a match equates to the basic nourishment of bread, whilst innovative light instillations compare to the meticulous presentations of haute cuisine. But don’t just take my word for it, feast your eyes on this little beauty that I went and did: 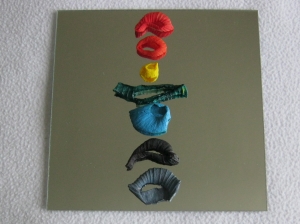 In this piece,  food objects – in this case, slices of onion – have been painted in the colours of the spectrum and placed on a mirror. This allows light – or at least the concept of light – to exist as a tangible entity, whilst simultaneously allowing the objects to transcend their physical purpose and attain value. The use of a mirror is important because it allows the concept of light remain elusive, whilst further allowing the food objects to exceed their physical boundaries.

So, there we are. Food and light. Told you it was a short post didn’t I? And hopefully just interesting enough to stop you gauging a hamster’s eye out with a rusty hook.