Positioned in between satisfying my crowdfunding rewards and waiting for perfume materials to arrive, I find myself in a brief period of reflection. Able to turn my mind away from the world of perfume briefly, and revisit something initiated last year – finding art in video games.

However, I wish to further my exploration into extracting poetry from video games rather than aping it. And so, I present to you poems creating by taking video game code and isolating parts of it, revealing text: 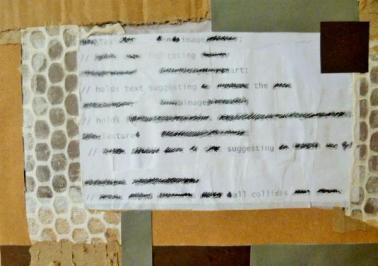 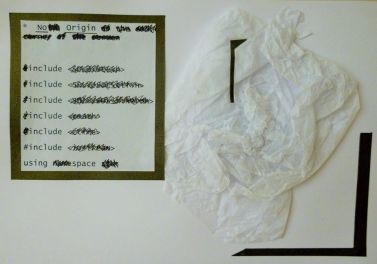 The idea remains – to extend the gaming experience into areas that reveal video games as a meaningful cultural force in a way that transcends their original purpose. Using video games as a platform for creative exploration illustrates a rich and full capacity for social, moral and personal comment. And assessing gaming from a fine art platform enriches our experiences with them. It’s a subject a great deal of passion for and something I wish to explore further. Indeed, hopefully at some point next year I’ll be setting up another open call about video games with fellow artist Sharon Mossbeck.

For now though, I’ll content myself with these pieces of work. They’ll both be on display at Arena Gallery, Liverpool, on the 8th and 9th August, along with work by other members of SOUP Collective. So do pop along if you can! 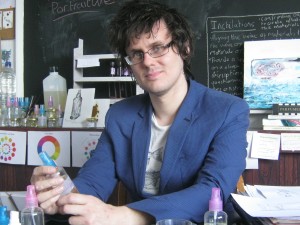 My thoughts towards the General Election, and what it means to me as an artist, haven’t really formed yet. I have a theory as to why this is, and it centers on the fact that I feel as though my work and career as an artist can exist and continue to grow in any event, regardless of the political landscape. I understand that this is a pretty naive and unsubstantiated view, and one what will be rigorously tested within the next five years. But it reflects two things: The relative momentum of my current practice and the fact that I’d like to think that I am resilient and astute enough to power through regardless. Is this naive? Probably, but I like to think of it as attempting to navigate my career through a Tory government positively and with the ability to use limitations to my advantage.

And it’s not to say I don’t care about politics, because increasingly I do. Especially when presented to me in a different and unexpected way – such as through the workshops, exhibitions, and events seen during Festival of the Mind in Sheffield last year. And of course something as massive as a General Election and what it means for the next five years of my life isn’t something I can just ignore. That’s why I’m writing this blog post, in fact – to see if putting my thoughts into words and placing them within a social platform can allow me to further understand them.

I didn’t vote for either Labour or the Conservatives (I didn’t vote for UKIP either, just for the record!) and I think that reflects my opinion that there is something about forging a career as an artist that is transcendent of politics – because being an artist is hard, and will be regardless of who is in power. You have to make opportunities happen for yourself – and work bloody hard in the process. You have to have fight, passion and an understanding of business. You’ve got to want it more than anything. It’s not as if opportunities would have started falling from the sky should Labour have been put in power. Post-election, various news articles appeared to present the narrative that, although Labour are currently weak and misguided, they are nevertheless the party we ought to have voted for. Hardly a ringing endorsement of an alternative government. Indeed, my career as an artist during the previous Labour government wasn’t exactly a bed of roses – I had to recover from two redundancies and increasing living costs. However, I was astute enough for my creative output to develop into something meaningful and – whatever happens in the next five years – I feel even more equipped now than I did then.

Actually, the more equipped I feel, the more compassion I feel for those less-so. I hate to find myself nodding sagely to the thoughts of Russell Brand, but something he said in a video post-election about needing to look after each other really hit home, honestly. Especially as I do have relative privilege – I don’t need to use food banks, I don’t rely on the NHS and I feel as though my career as an artist will survive just fine. Maybe instead of resting on these laurels I should be more supportive of the poorer and seek to further support the arts in Sheffield and beyond. Who knows, if we all rally round and help each other, we may end up with the strong and cohesive United Kingdom David Cameron says he wants – ironically though, it will be a consequence of his government, not because of it.

And don’t forget, art has the capacity to instigate social, moral and political change, and tends to have more potency when imitations are placed upon it. So get out there and create, support, be supported and be nice to each other!