Last week marked the end of Speculative Studio Spaces – by exhibition at Access Space, Sheffield. The experience was punctuated by two events; the Opening Evening and an Artists Talk and Guide. Both gave me valuable insight into how the project is perceived, what works and what can be tweaked for upcoming exhibitions due next year.

Two things in particular caught my attention – the need for my presence and how Speculative Studio Spaces demands certain a level of engagement. Speculative Studio Spaces is not a piece that can be glanced at passively. It requires physical and mental input and a sense of resonance within the space. It will reveal itself to you if you give it time. It can be easily dismissed as nothing but a studio space but it’s true existence – that of a fabricated studio space based on someone’s exhibition piece – isn’t all that hidden if you take the time to find it.

But of course, how would an audience even be expected to know this? Well, that’s where I come in. Essentially I need to be there. Transforming the space from an instillation to a performance piece – I act as the key to unlocking the space as I reveal myself not as an artist in his studio space, but as an artist responsible for fabricating a speculative studio space. With myself present, the audience have an access point – a way of penetrating the space and identifying with it. Essentially I would position myself as the ultimate interactive prop!

The talk and Guide event offered me the opportunity to externalise my thought process and hence come to the above conclusions. It was a valuable means of evaluating the work and receiving feedback. Though more than this, it offered an audience insight into the process and reasons for making.

And yet, Speculative Studio Spaces will become a support act within my overall creative output for the next six months as attentions return to the world of perfumery. The transition began in earnest last weekend, with a trip to the Derby Makers Faire. This gave me an opportunity to display my perfume making abilities whilst describing to an audience my approach to perfumery. 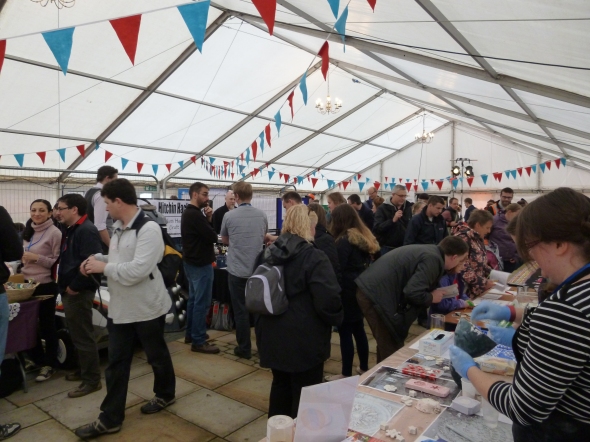 My practice was very well met, with an interactive element that went down especially well with under-10’s. Indeed, I hadn’t thought of delivering this activity before but the opportunity is certainly there.

It also struck me how much I actually know about perfumes. That might sound like an odd statement, but that’s probably because I don’t consider myself a perfumer – more an artist currently using perfume as a platform to instigate creative processes and provide alternatives to pre-conceived notions. Still, I am able to hold conversations with those with similar practices, and offer advice and guidance on the processes involved. I certainly seem more adept in the language of perfumery than I’d perhaps considered. And as such, more adept in the world of scent in general.

So, In preparation for my exhibition at Bank Street Arts early next year, I am posing the question to other artists and makers  ‘why do you make art?’ and I will use the response provided to create a perfume that acts as a portrait. So if you’re an artist or maker, I’d love to hear your response! 🙂

This entry was posted on October 31, 2015 by borkowskyart. It was filed under Art and was tagged with artists, culture, Derby, events, makers, makers faire, making, perfume, Sheffield, studio spaces, talks.

My £5.50, 5ml tinctures have certainly been a popular purchase over on my online shop. One is inspired by plague cures and one by the bounty of the land. Take a look for yourself using the link in my bio 👍🎨 #art #making #perfume #perfumery #scent #smell #aroma #fragrance #fragrancelovers #pomdemic #cornucopia #bottle #tincture #sale #bespoke #original #supportlocal #instaperfume #plague #bounty
Thank you to everyone who has purchased a perfume or two from my online shop so far. I spent today packaging the orders and sending them out. You can check out my online shop by following the link in my bio. 👍🎨 #art #making #packaging #shop #online #supportlocal #perfume #perfumery #studio #perfumerofthepeople #fragrancelovers #fragrance #scent #smell #aroma #instaperfume #bespoke #craft #original #handpoured