Cup of Tea, Anyone?

What exactly is a cup of tea? It’s a bloody good question, I’m sure you’ll agree, and one that perhaps art is able to explain: Or at least enable us to explain it for ourselves.

As an object, tea is one of the most universal recognisable consumable products out there. And as such, is open to an almost limitless degree of subjectivity.  It contains within it the broadest of subjects – from ancient Chinese mythology to accessible domestic consumption, and from being cited in medical texts to being recognised as a symbol of ‘Britishness’: It seems that tea contains as many stories as the individuals that drink it.

However, it is clear to me that, despite the rich complexities concerning the very notion of tea, it is undoubtedly a revered and highly relatable product. Tea is a powerful vehicle that is able to bring people together and allow individuals to connect through simple pleasures. It is a common tool that allows the individual to discover mutual comforts and shared interests and so ultimately to achieve a base sense of integration into society.

So, what with the sheer boundless nature of tea, how the bloody hell am I going to achieve a visual rendering of it with any coherence?  Well, my theory is that a sense of objectification is needed in order for an audience to connect with tea on a base level. It is then for the audience to decide how to respond to my work and how to apply it to their experience of tea. 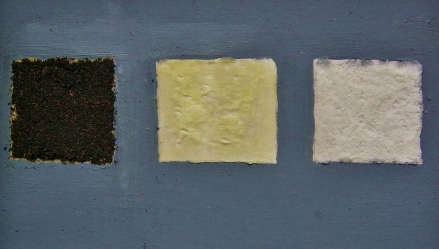 In my above work, ‘The Infinite Cup Of Tea’  I seek to remove all experiential, symbolic, social, cultural and political connotations associated with tea in order to visually explain that it is the very properties of a cup of tea that a mass audience – of any race, religion or culture – can respond too. Essentially what I’ doing is laying out the components of a cup of tea, and allowing the audience itself to attach meaning: This is a cup of tea without identity, but from which an identity emerges when an audience establishes a connection.

This work is isolated from form and placed with reverence upon the gaze of the viewer. It is limitless in potential yet restrained by personal contemplation. It is a lie, from which the viewer extracts their own truth.

Anyway, enough of this tea-based musing – I’m off to put the kettle on.

This entry was posted on May 31, 2013 by borkowskyart. It was filed under Art, tea and was tagged with British, conceptual art, cup of tea, milk, oil paint, Paint, paint making, still life, sugar, tea leaves.